Despite being Scottish, I confess that I don’t really know Edinburgh as well as I probably should (especially considering my brother lives there!), being a West Coast gal myself. However, I made it my mission the last time I was over visiting to update myself on what vegan options are available, and I was pleasantly surprised: it always used to be that Glasgow was the vegan-friendlier city of the two, and, while I would still argue that the quality of the vegan food in Glasgow is generally better, there now appears to be a larger choice for vegans in Edinburgh (mostly in non-vegan cafes/restaurants). As a result of the sheer volume of options though, it can be tricky to know what to prioritise (especially as Edinburgh’s very spread out so things are not always in the location you want them). So here’s a low-down of the places I’ve tried (both the good and the bad), as well as several that are top of my list to try next time.

This is one of the older, well-known (and loved) veggie restaurants in Edinburgh, which used to be our go-to for family meals on special occasions (birthdays, Christmas, etc.)… Partly because, unlike a lot of veggie/vegan restaurants, it’s more ‘high-end’ than hippy, which appeals to my parents! Inside is really lovely in fact – classy, yet warm and cosy, with booths as well as larger tables, and just an overall relaxing ambiance. On the other hand, the vegan options there were always disappointing and limited – it’s definitely more for veggies than vegans. I don’t know if it’s improved recently as we haven’t been back in a while, but it’s worth going for a visit anyway if you’re in town, especially if you’re out with parents or someone you’re trying to impress 😉 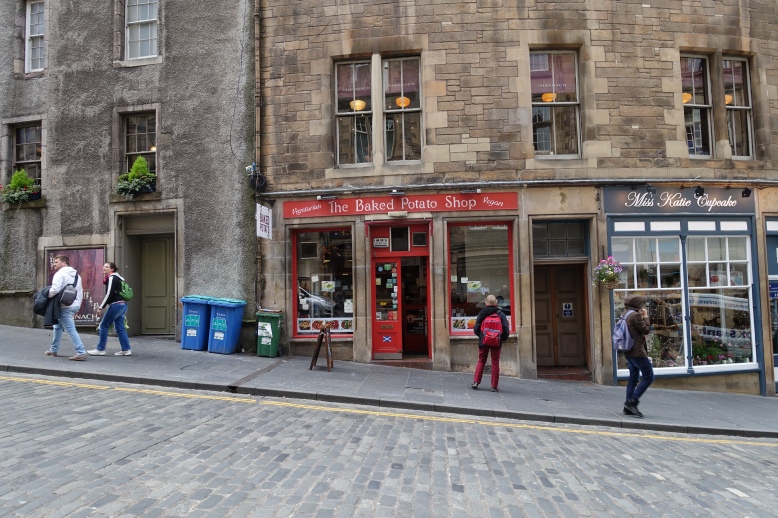 Another of Edinburgh’s institutions, the Baked Potato Shop benefits from its prime location just off the Royal Mile. As a result, during the Festival the place is PACKED, queues all the way down the street (literally – the shop itself is tiny inside). And there’s only one small table in the corner, so take it as given that you’re going to have to order for take out (which is tricky finding somewhere to sit and eat, especially when you’re freezing and wet, as is usually the case Scotland!). As the name suggests they mostly sell baked potatoes, with a variety of salads (hot and cold) as toppings – around half are vegan. My favourite is the BBQ tofu and bean salad, though I found the vegan coleslaw disappointing the time I went there. 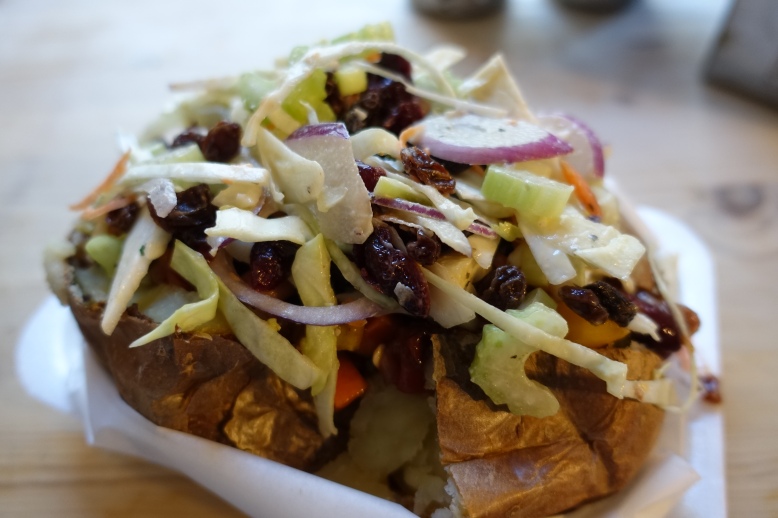 They also usually have samosas and a few tray-bakes (flapjack, lemon loaf cake, etc.), most of which are vegan. The quality isn’t outstanding, but it’s fairly cheap for what you get, and suuuuper filling (you choose between a small – one potato – or medium – two potatoes – which was ridiculously huge… Note to self: don’t order when you’re starving!). And just what you need to warm your hands (and belly) on those cold, wet, dreich Scottish days. 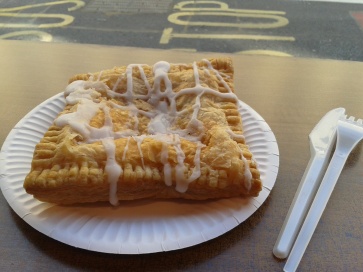 Vegan cherry pie from The Piemaker

The Piemaker is similar to Greggs (if you don’t know what this is, it’s a British chain of ‘bakery’ – not European style (e.g. gourmet bread, etc.), more like greasy-spoon style… and the focus is more on the sandwiches, pies and cakes, rather than bread). They sell 4 savoury vegan pies, and 4 flavours of sweet vegan ‘pie’ (really more like turnover, or Danish pastry): apple and blackcurrant, apple and raspberry, apple, or cherry. I had the cherry, which was very nice but a little sickly. Good for a weekend treat!

UPDATE: I think it might have closed down! So sad, it was such a nice place… Let me know if you have any news about why it shut, etc. 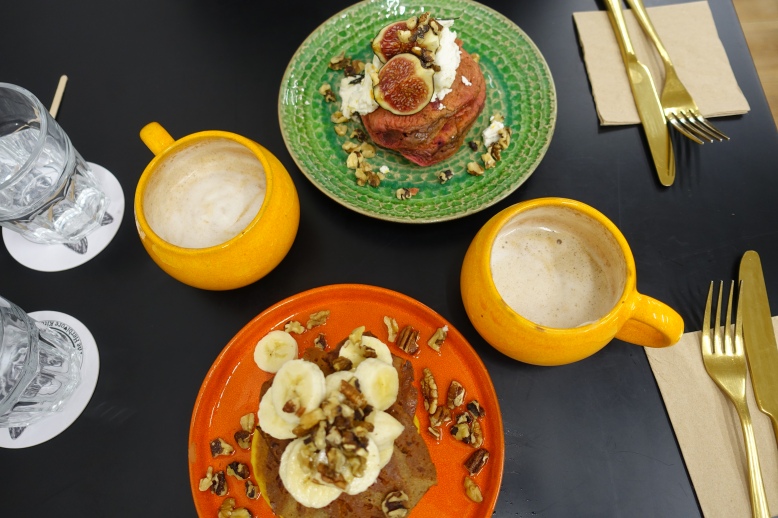 I tried this place the other day with a friend and wow, was I glad I suggested it!! Such a sweet little café, all veggie, with plenty of vegan options, including super delicious vegan pumpkin pancakes! It was right before Christmas and they were also advertising a yummy-sounding vegan Christmas lunch menu – I wished I could have tried it! The only slight let-down was the turmeric latte, which had a slightly ‘gritty’ texture (but then, to be fair, I’m not a super big fan of turmeric lattes anyway). Definitely somewhere I’d go back to, even though it’s a bit of a walk from the centre (no problem at all when you’re in good company with lots to catch up on 🙂 ).

A Hawaii-themed café super close to the Royal Mile, this place is obviously popular with the locals because it was packed even though it wasn’t Festival season (annoying for finding a table!), though honestly I’m not really sure why – the coffee was terrible (I ordered a cinnamon latte (with almond milk I think): the coffee was way too strong, the milk was curdled, and the cinnamon was completely overpowering (and not sweet at all)), the vegan Hawaiian bowl wasn’t bad but lacked sauce and was totally overpriced at £7 considering it was essentially just quinoa, sprouts and a little avocado, and it’s really not very comfy to sit in (especially when it’s packed) as well as being quite dark (it’s downstairs, like many Edinburgh cafes). There were a couple of other vegan things on the menu (not many: acai bowls, smoothies, juices, a sandwich, and a Buddha bowl) so maybe I just chose the wrong thing. I’d probably try it again, if it was super quiet, but I’d definitely have a back up just in case! 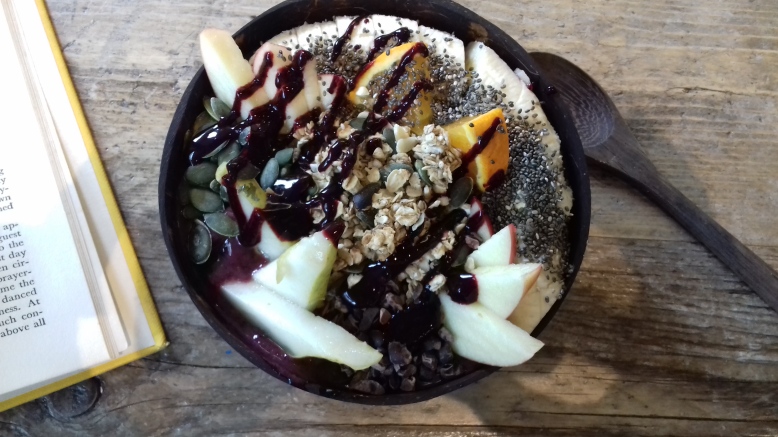 Since the first time I had a look in here (when it was mainly take-away, quite dark inside and only a few seats), Pumpkin Brown has revamped its image – making it brighter inside with more seating, and more wood/earthy feel than minimalist – so now it’s somewhere I would definitely want to go back. The smoothie bowl I tried was good, although pretty expensive, but it is all vegan and refined-sugar free/healthy, and their savoury food sounds good too. Besides 2 flavours of smoothie bowl, they also serve healthy toast (avo smash or almond butter), porridge, soup, a few types of sandwiches/wraps and salad boxes. Their coffee was pretty good too, with lots of milk options, and some superfood lattes to boot.

Just across the road from Pumpkin Brown there is another takeaway place (only a few seats inside) that has a buffet salad bar and advertises vegan options in the window… However, on closer inspection, the vegan options are super limited, only a few vegan tray-bakes (flapjack etc.), and the quality of the food doesn’t look great to be honest, so I think I’d give it a miss. 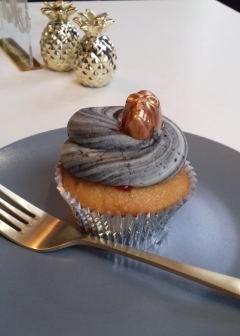 Just opened in December 2018, Naked is an all-vegan (mostly gluten-free) bakery and cafe. As well as a range of vegan donuts, cupcakes and macaroons (they sell out fast, but you can also order the macaroons online), they have waffles, avo toast, scrambled tofu, and several vegan burgers on the menu. The coffee wasn’t very ‘pretty’ but still good, and the donut was yummy! I also tried a raspberry/white choc cupcake on a separate occasion, which was a little disappointing (the flavour was only in the icing, not the cake itself), so I’d stick with the donuts or macaroons instead. Definitely a place to go back to.

The Hendersons chain is also a historical institution in Edinburgh, being one of the first veggie restaurants in the city. They used to just have a canteen-style café downstairs (‘The Salad Table’), with a more formal bistro in the adjacent room, and then a takeaway deli and shop upstairs. The choice for vegans however was always extremely limited, and the quality of the food really wasn’t great… So I was intrigued to hear that they now also have a vegan restaurant just around the corner. While I haven’t been there myself, my parents went there the other day, and unfortunately it doesn’t seem to have redeemed Hendersons for vegans. Apparently, the quality was still really bad – like the ‘old school’ vegan cafes you used to get, where they were still just experimenting with vegan versions of things (lumpy soya milk, etc.) without much success. So definitely give this one a miss.

UPDATE: I think this place has shut down?! Will confirm the next time I’m in Edinburgh!!

Daylight Robbery looks much like a diner inside – quite dark as it’s downstairs – with a bar instead of the usual diner counter. I was quite disappointed as they don’t have any non-dairy milk, which is surprising since they have several vegan options on the menu (and who doesn’t serve non-dairy milk these days?!): 5 mains and 4 starters/light bites, some of which looked quite good. It’s not super comfy to sit in, but might be worth trying especially if you’re going out with non-vegans, and it’s fairly central too which is useful.

I couldn’t believe I only heard of this place recently as it’s completely vegan (one of the few totally vegan places in Edinburgh, never mind right in the centre!). It was also super quiet inside, which was great for getting a table (there are plenty of tables in any case), but I don’t think many people know about it, so I hope it lasts because it was really good: the coffee was nice, not too strong, and the coconut milk foamed well (I had a coconut cappuccino on the recommendation of the owner) and the taste wasn’t too overpowering. 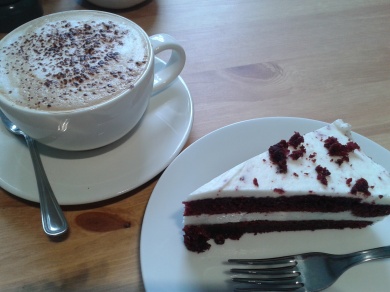 They had 5 types of vegan burgers (Portobello, smoked tofu, thai, falafel and something else I forget!), 5 kinds of sandwiches (including BLT, hummus, and cheese), 2 salads, smoothies, and 4 vegan cakes, which was already impressive but even more so because they weren’t the standard (i.e. boring!) ones; they had red velvet, peanut butter cheesecake, red berry chocolate, and cheesecake. I was super excited to try the red velvet because you don’t often get a vegan version of that, and it didn’t disappoint. I also liked that they offered free water immediately, and the owner seemed really lovely.

UPDATE: tried the ‘CBLT’ sandwich – ok, but not amazing, bit overpriced to be honest. Would just go for cake next time!

Real Foods is a chain of healthfood shop in Edinburgh. The city centre branch is definitely worth a visit, though be prepared to leave with your wallet a lot lighter… As well as unusual cooking ingredients, they have some takeaway sandwiches and cakes in the fridge (at the back) as well as fresh breads, a huge selection of biscuits and snacks, and some toiletries and vitamins. It’s not all vegan so just be careful with some of the bakery products, but otherwise I love this place!

Places I still want to try

Vegan icecream and waffles from Affogato

If there’s anywhere else you’d particularly recommend please let us all know in the comments below!

As we say in Scotland: Slàinte (cheers)!

© Charlotte Hay and A Vegabond’s Life, 2017. Unauthorized use and/or duplication of this material without express and written permission from this blog’s author and/or owner is strictly prohibited. Excerpts and links may be used upon request, provided that full and clear credit is given to Charlotte Hay and A Vegabond’s Life with appropriate and specific direction to the original content.